While we already know that chocolate has many health benefits, here are some interesting facts about chocolate that you may not know:

1. Chocolate is literally “the food of the gods”.

Chocolate originates from the cacao tree, the botanical name of which is Theobroma Cacao. Theobroma is derived from the Greek theos meaning “god” and broma meaning “food”—making choclate the food of the gods.

2. Chocolate has been around for a while:

The first people to harvest chocolate were the Mokaya and other pre-Olmec peoples who lived in southeast Mexico around 1,000 B.C. The word “chocolate” is derived from the Mayan word xocolatl, or “bitter water.” 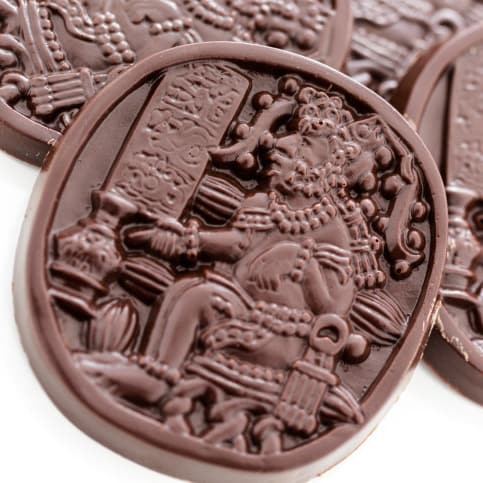 3. Cocoa beans were used as currency:

In Mayan civilization, cacao beans were the currency, and counterfeiting cacao beans out of painted clay had become a thriving industry. Goods could be priced in units of cacao. While the Spanish conquistadors hoarded gold, the Mesoamericans hoarded cacao beans. In some parts of Latin America, the beans were used as a currency as late as the 19th century.

It takes approximately 400 cacao beans to make one pound of chocolate.

6. Chocolate was originally consumed as a drink.

In fact, chocolate was consumed in liquid form for 90% of its history until… The Fry and Sons shop concocted what they called “eating chocolate” in 1847 by combining cocoa butter, sugar, and chocolate liquor. This was a grainy, solid form of the treat. In 1847, Fry’s produced the first solid chocolate bar.

It has an anti-bacterial effect on the mouth. A study by researchers at Osaka University found that parts of the cocoa bean help to thwart tooth bacteria and prevent tooth decay. Unfortunately, most chocolate also contains sugar, so it’s probably not a good strategy to avoid cavities.

8. Consuming chocolate has been linked to lower risk of heart disease.

Studies have shown that eating DARK chocolate reduce the risk of heart disease by one-third.

Turns out there is too much of a good thing. The primary active ingredient in chocolate, theobromine, is a powerful stimulant of the central nervous system. Theobromine poisoning can cause heart failure, seizures, acute kidney damage and dehydration. A lethal dosage of chocolate is about 22 lbs.